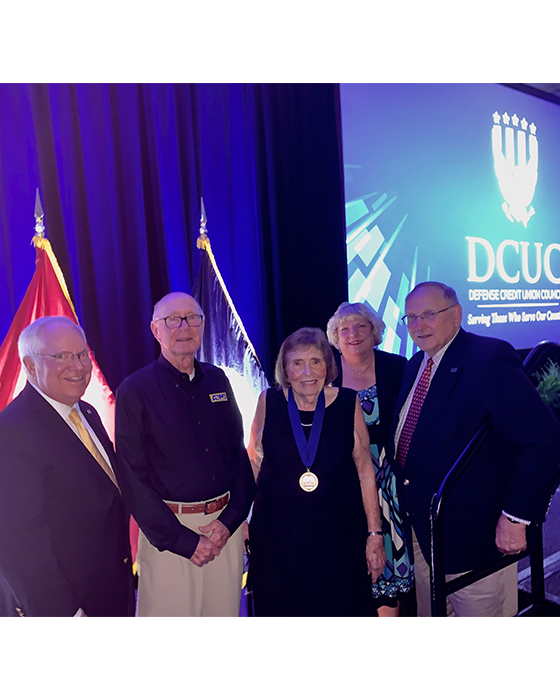 ABNB is proud to share that Mary Ann Melchers, Member of our Board of Directors and former Chairperson, has been inducted into the Defense Credit Union Council’s (DCUC) Hall of Honor. The Hall of Honor was established in 2000 as a means of recognizing individuals whose exceptional contributions have made a significant difference to the defense credit union community. DCUC states that the award “highlights the outstanding accomplishments of leaders, volunteers, management and staff alike, whose efforts and endless support of the credit union movement and DCUC epitomize the Council’s values and philosophy.”

Melchers has been working in the credit union community for over 55 years and has been a pioneer for women in the industry. In 1965, she became a member of the Credit Committee at Naval Base Norfolk Federal Credit Union. This was an especially significant achievement considering that women were unable to obtain credit in their own name at that time in history. Despite those obstacles, she began her lifelong quest to ensure that all people of modest means regardless of gender, race or creed have access to credit and the other vital financial services they need. Through her leadership, she also made history as the first woman elected to the office of Chairperson of the Board of Directors at Naval Base Federal Credit Union. She was instrumental in successfully consummating the 1996 merger of Naval Base and Amphibious Base Federal Credit Unions, resulting in what is now known as ABNB Federal Credit Union. She has been a long-time supporter of DCUC, and has attended conferences, served on committees, and has actively supported the defense credit union community in many ways throughout her career.

ABNB is honored to have Mary Ann Melchers as a long standing member of our ABNB family and are proud to share the news of her induction into DCUC’s prestigious Hall of Honor. Melchers has not only served as an incredible leader for our business, but also as a role model and inspiration for women throughout the community. We offer our congratulations to Mrs. Melchers for her lifetime of achievements.